The New Jersey chapter of the American Civil Liberties Union is representing a woman who was fined after being ordered to remove her three “F*** Biden” signs.

Roselle Park homeowner, Patricia Dilascio, and her daughter, Andrea Dick, were ordered to remove the signs or face a $250 a day fine.

The move to defend a Trump supporter has shocked many, as the ACLU has become increasingly partisan in recent years.

“All New Jerseyans have the right to express themselves freely under the First Amendment,” LoCicero said. “Roselle Park’s ordinance against posting obscene signs should never have been applied to political signs.”

Roselle Park’s Democrat Mayor Joseph Signorello III, who is running for state senate, said that he had been receiving complaints about the signs because of the nearby elementary school.

Dilascio was first issued a municipal ordinance violation notice last month and then a court summons when she failed to remove them.

The local ordinance prohibits “any obscene material, communication or performance or other article or item which is obscene within the Borough.” However, they describe obscene material as that which “depicts or describes sexual conduct” or “lacks any serious literary, artistic, political or scientific value.” The family has argued that the signs do contain serious political value.

The family also argued that the ordinance was unconstitutional, but Roselle Park Municipal Court Judge Gary Bundy disagreed and ordered the fine of $250 a day, beginning on Thursday, until it is removed.

“I think the judge got it right,” Jarrid Kantor, the borough’s attorney who argued the case in municipal court, told NJ Advance Media. “I think he upheld the ordinance as written. The ordinance itself survives constitutional scrutiny…”

Dilascio has vowed to take the fight all the way to the Supreme Court if necessary.

“I feel like my First Amendment right is being stripped from me,” she said, according to a report from NJ.com. 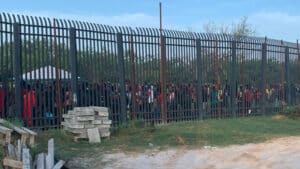 WATCH: Huge Group of 350+ Migrants Arrive at the Border; Many from Haiti, Africa, Brazil