A Look At Biden's First State of The Union Address

On Tuesday, President Biden addressed the nation in his first State of The Union since taking office in 2021.

The President started his address by saying, “Last year COVID-19 kept us apart, tonight we are together again.”

Biden moved right into a statement directed at the power of the Ukrainian people. He said that Putin had hoped to conquer a nation, but “he met the Ukrainian people” and was met with a formidable force. The President noted that Americans stand with Ukraine during this time of crisis.

“When dictators do not pay a price for their actions, they keep moving,” Biden said as he spoke of the sanctions levied against Russia. The President said that America is part of a coalition that stands against Putin and is working to put an end to the actions of the Russian President, who he repeatedly called a “dictator.”

The President went on to outline the financial sanctions against Russia. He mentioned the sanctions which affect the nation’s technology sectors.

Biden said he wanted to make a simple statement directed at Putin, saying “No More.” He noted that U.S. officials were making a move to seize the assets of Russian oligarchs.

President Biden then announced that the United States was closing its air space to all Russian aircraft.

Biden did say that the U.S. had mobilized troops to be prepared to defend and protect NATO allies with the “full force of our collective power.” The President noted that thousands of soldiers, military vessels, and resources had been deployed to the region to be prepared for any further western advance into Europe.

The President transitioned into addressing the impact on our economy and announced that 60 million barrels of oil had been released from reserves to help lessen the impact on gas prices in America.

The President spoke of unity. He said that we now see “more unity among nations and their leaders” than at any time in history. He said that as a result of unity, it should be noted that Putin will never “weaken the resolve of the free world.”

Biden went on to address the hardships of the last two years in the United States. He said that COVID-19 had deeply hurt America. He referenced the American Rescue plan, calling it one of the most impactful pieces of legislation ever passed. The President said that it helped put tens of millions into people’s pockets and lessened poverty in the U.S. Biden said it contrasted the tax cuts passed by Trump and had a better impact on helping change lives.

Biden then said that his administration had added more jobs than any administration in history. He stated that over 6 million jobs were added to the American economy in the last year.

The President said that the Infrastructure Bill would provide hundreds of thousands of jobs improving airports, roadways, and water systems. He said the impact would improve lives as well as improve the economy.

The President said that investing American tax dollars is best done by buying American. He said the improvements and work across the U.S. would be made by buying American products to accomplish all of the objectives in the Infrastructure Bill. He stated, “all of it, all of it would begin with being built in America.”

Biden noted that the COVID-19 pandemic struggles had affected employment, supply chains, and labor markets. It has directly affected inflation, which has soared at a rate faster than any time in the past 40 years. The President said his answer to the problem of inflation was not to “lower wages” but for companies to “lower costs.” He said the answer was investing in American-made products and the American supply chain.

He said his new plan is called “Building A Better America.” He said his plan would ease long-term inflation and ease the financial impact on Americans.

He went on to say that his focus on Climate Change would help impact energy prices for all Americans. He stated that an investment in energy efficiency and clean energy would save Americans more than $500 per year.

He moved on to talk about reducing the cost of childcare. He said that standardizing childcare costs, but cutting the amount people pay, would help families achieve more and pursue better careers. All of this would help spur on the economy,

He said that he intends to standardize the cost of housing and long-term care for Americans.

Biden said that anyone in the U.S. who makes less than $400k per year would not pay any more in taxes again. He reiterated the call for leveling taxes by saying, “they will not pay a single penny more, not a single penny more,” as the government works to equalize the tax structures in America. He said he would focus on closing the loopholes in the United States that allow the super-wealthy to avoid paying appropriate taxes.

He said a critical step in fighting inflation and helping level taxes would be to confirm his federal reserve nominees.

The President said the Department of Justice would begin prosecuting those who committed fraud by misusing pandemic relief funds and appoint a chief prosecutor to oversee the effort.

The President said he was taking aim at businesses that overcharge Americans.

He said that he would pass legislation to standardize pay for Americans, making minimum wage $15 across the U.S. He said the act would help build the nation from “the middle out,” referring to his focus on building up the middle-class.

The President took time to recognize the direct impact of COVID-19 on Americans. He noted the lives lost, jobs lost, and economic impact. He went on to state that his administration had made strides in reducing the case count to a low “not seen since July of last year.” He said his administration’s progress was the reason that the pandemic was coming to an end, and it would no longer control our lives.

The President gave four steps in moving ahead safely so that COVID would not control our lives. The first was a focus on staying vaccinated and up-to-date on boosters. He said he was going to launch a “test to treat” initiative, in which patients who test positive would receive the anit-viral treatment from Pfizer at no cost. He also noted that all Americans could order another round of free tests starting next week.

His second step outlined the development of new vaccines and being prepared to address any new and emerging variant.

The third step the President outlined was a call to Americans to return to normal; for those working at home, to return to their offices. He made a vow to keep schools open.

He said his final step was to focus on a continued effort to vaccinate other nations and provide aid to ensure other nations were not affected by the COVID-19 virus.

The President called for a “reset” and asked that citizens “no longer allow COVID-19 to be a dividing line of politics and opinions.” He said it was time to start seeing each other as “fellow Americans.” He said we could not change what has happened, but we can change what is ahead.

Biden addressed the rising crime in the U.S. by calling on elected officials to pass bills funding more law enforcement. He said the answer for America “is not to defund the police, but to fund more police.” He called on Congress to pass tighter gun control measures and ensure that illegal ownership is ended across America.

Biden said tighter gun control is “not an infringement on 2nd amendment rights, but a move to save lives.”

The President called on Congress to pass the John Lewis Act in order to help make elections far more equal and accessible to Americans.

President Biden then moved to honor Supreme Court Justice Stephen Breyer for his time and service in the high court as he prepares to retire. He then mentioned his nomination of Justice Ketanji Brown Jackson for a seat on the Supreme Court, touting her accomplishments. Biden said a tremendous honor of being an American President was to appoint justices to the Supreme Court.

Biden then made a move to call for a secure border and a revision to the immigration system in America. He said this was a move to protect our nation and democracy.

Biden then made a call to lawmakers to support and protect the right of women to have unrestricted access to abortions. He called it a move to ensure proper healthcare for women across America.

Biden said there was more alignment than divide in the government. He noted that in 2021 he signed more than 80 bi-partisan bills into law.

Biden then called for a unity action that all elected officials could support.

He noted four objectives in his plan, which starts by addressing the opioid crisis in America via prescriptions and addictions. His second objective was to address mental health, starting with kids in schools that received funding under his American Rescue Plan for this objective. He noted that social media and digital media restrictions over targeted content and ads must be stopped to protect mental health.

His third objective is to protect and support the American military veterans. He said the U.S. must focus on equal and unrestricted access to proper healthcare for all veterans whose lives have been impacted by their service.

His final objective was to focus on cancer treatment and cures in the U.S. to end the suffering of millions. He called this objective personal, calling cancer the 2nd leading cause of death in the United States. He said his goal was to cut cancer death rates by more than 50% over the next 25 years. He asked for legislation to fund an ARPA-H project to drive research to achieve this objective, a project that will fall under the National Institutes of Health (NIH).

The President concluded by calling on Americans’ strength to lean into their drive for a better future. He said, “it is through that strength and courage we would save democracy.” He noted that America is “the only nation on earth that has turned every crisis into an opportunity.”

He closed by saying that “the State of The Union is strong because you as Americans are strong.” 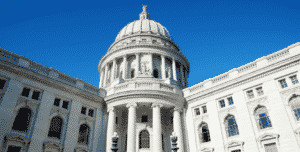